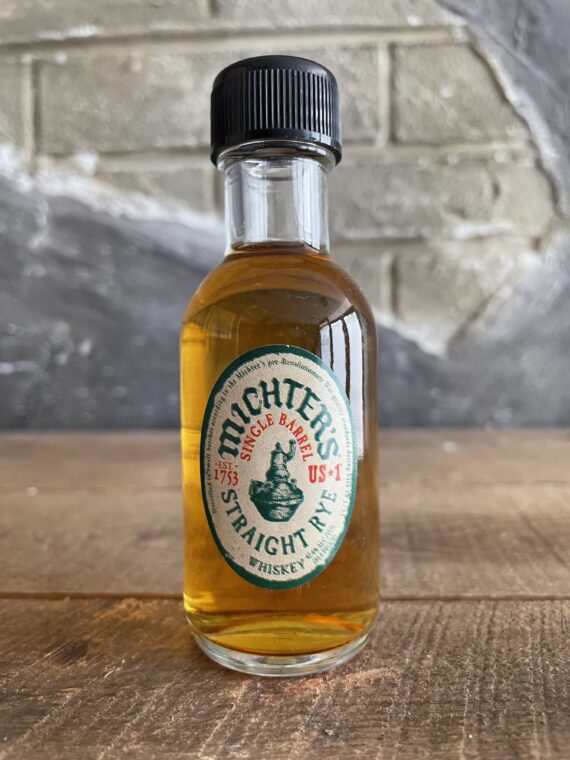 Michter’s Single Barrel Straight Rye does not often come in a miniature bottle so grab your change to obtain one….

America’s first whiskey distilling company, Michter’s rich history dates back to 1753 when a farmer in Schaefferstown, Pennsylvania distilled his first batch of whiskey from hardy rye.

When the famous Michter’s distillery was abandoned by its owners in 1989, they left everything from the equipment, near-millions of gallons of stock, and perhaps most importantly, the rights to the name. Michter’s distillery developed a cult status in the subsequent years due to the release of the much-lauded A.H. Hirsch Reserve, distilled there in 1974 when it was still called Pennco.

The new owners of the Michter’s name, Chatham Imports, started a new company called Michter’s Distillery LLC, and operated as a Non-Distiller Producer (NDP) for a number of years, meaning they sourced their whisky from other distilleries and bottled it under their own name. Many of these releases have been incredibly sought after, with early batches of their single barrel bourbons rumoured to have been sourced from the legendary Stitzel-Weller.

In 2015 they constructed a new Michter’s distillery in Shively, KY and have begun barrelling their own stock ever since. With the construction of a new warehousing facility in 2018, it is expected this new Michter’s will soon be bottling all of its own whiskey, developing an important legacy of its own.

Whiskey author Fred Minnick has confirmed in his book, Bourbon Curious, that the source of Michter’s Kentucky labelled products are sourced from Brown-Forman.