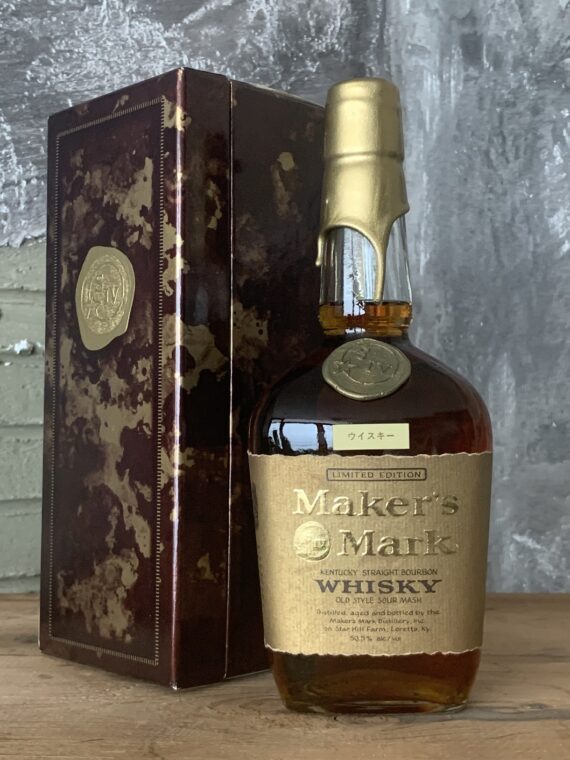 This Maker’s Mark was the first high-proof release of the distillery, bottled for Japan in the 1990’s.

The distillery was listed on the National Register of Historic Places on December 31, 1974, and designated a National Historic Landmark on December 16, 1980, listed as “Burks’ Distillery”, the first distillery in America to be recognized while the landmark buildings were in active production.

Maker’s Mark was sold to Hiram Walker & Sons in 1981, which was acquired by the distillery giant Allied Domecq in 1987. When Allied-Domecq was bought by Pernod Ricard in 2005, the Maker’s Mark brand was sold to Deerfield, Illinois-based Fortune Brands. Fortune Brands split in 2011, with its alcoholic beverage business becoming Beam Inc.. Beam became Beam Suntory, in 2014.

After the brand’s creation by Bill Samuels, Sr., its production was overseen by his son Bill Samuels, Jr. until 2011 when he announced his retirement as president and CEO at the age of 70. His son Rob Samuels succeeded him in April 2011.

In January 2014, Beam Inc announced its sale to Suntory, creating the third largest distilled spirits maker in the world. News of the proposed sale included bourbon executives vowing “the product taste won’t change – and neither will the company’s historic purity standards.”