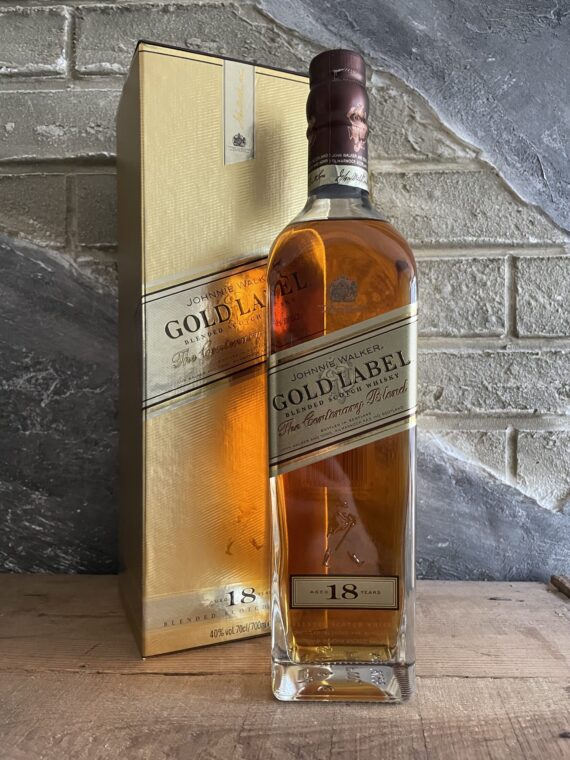 Johnnie Walker Gold Label Centenary Blend is a blend of 15 different whiskies which each are all at least 18 years old. Johnnie Walker Gold Label Centenary was created by Sir Alexander Walker in 1920 to celebrate the founding of the company hundred years earlier. Although discontinued during the war due to shortage of blending stocks, the label was reintroduced in 1992, with a blend based upon the original blending notes left by Sir Alexander seventy-five years earlier. In 2009 the bottle and box where reshaped and available until 2013 when Centenary phased out in favour of the current NAS expression Gold Label Reserve. This is the second generation version, available from 2009 till 2013.

Originally known as Walker’s Kilmarnock Whisky, the Johnnie Walker brand is a legacy left by John “Johnnie” Walker after he started to sell whisky in his grocer’s shop in Ayrshire, Scotland. The brand became popular, but after Walker’s death in 1857 it was his son Alexander Walker and grandson Alexander Walker II who were largely responsible for establishing the whisky as a popular brand. Under John Walker, whisky sales represented eight percent of the firm’s income; by the time Alexander was ready to pass on the company to his own sons, that figure had increased to between 90 and 95 percent.

Prior to 1860, it was illegal to sell blended whisky. During that time John Walker sold a number of whiskies—notably his own Walker’s Kilmarnock. In 1865, John’s son Alexander produced their first blend, Walker’s Old Highland.

Alexander Walker introduced the iconic square bottle in 1870. This meant more bottles fitting the same space and resulted in fewer broken bottles. The other identifying characteristic of the Johnnie Walker bottle is the label, which is applied at an angle of 24 degrees and allows text to be made larger and more visible.

From 1906 to 1909, John’s grandsons George and Alexander II expanded the line and introduced the colour names. In 1908, when James Stevenson was the Managing Director, there was a re-branding of sorts. The whisky was renamed from Walker’s Kilmarnock Whiskies to Johnnie Walker Whisky. In addition, the slogan, “Born 1820—Still going Strong!” was created, along with the Striding Man logo, a figure used in their advertisements to this day, created by illustrator Tom Browne, in honour of the founder, and given the same name.

The company joined Distillers Company in 1925. Distillers was acquired by Guinness in 1986, and Guinness merged with Grand Metropolitan to form Diageo in 1997.