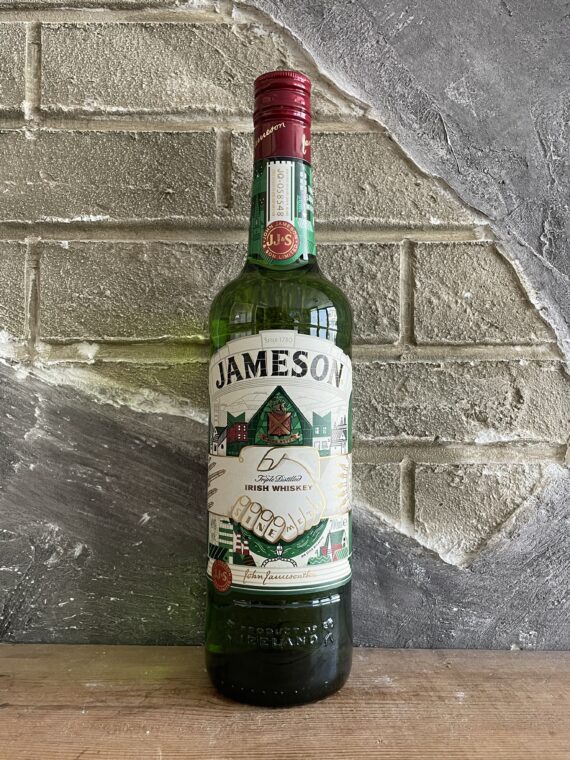 In 2017, Jameson is proud to be working with Steve McCarthy, a Dublin based designer and illustrator.

Sine Metu is the Jameson family motto and it has been at the heart of the company since it was founded in 1780. It translates to “Without Fear” and is an attitude that means being open to new people and new experiences. It is the creative starting point for Steve’s approach.

‘Chance your arm’ is a very Irish expression, which is about believing that something great could happen when you dare to try something new.

In 1492 ‘Black James’ Butler and his men found themselves barricaded behind the door to St. Patrick’s Cathedral in Dublin. On the other side was Gearóid Fitzgerald who, tired of the constant fighting, decided it was time to make peace. Fitzgerald ordered his men to cut a hole in the door before extending his hand through the gap as a token of friendship. Rather than cut his arm off with a sword, Butler shook it and the long standing feud came to an end, giving Dublin one of its most famous sayings – ‘to chance your arm’.

In Steve’s design he has brought the ‘chance your arm’ story to life with two outstretched hands, exchanging a handshake which is framed by the St. Patrick’s Cathedral door of Reconciliation. On the knuckles of each hand can be found the tattooed words “Sine” and “Metu”, a reference to the people around the world that have been inspired by the Jameson family motto and have etched it upon their skin as a reminder that when you fear a bit less, you live a bit more.

In the background of Steve’s design are depictions of landmarks around the city that are loved by the people of Dublin and the artist himself. The bottle depicts historic Dublin landmarks such as the Ha’penny bridge across the River Liffey, the surrounding Irish mountains and the Smithfield tower. Steve’s own story is told through on the neck of the bottle as it represents the view at night from the windows of his old studio.

The company was founded in 1780 when John Jameson established the Bow Street Distillery in Dublin. Jameson was Scottish, a lawyer from Alloa who had married Margaret Haig, a sister of the brothers who founded the main Haig firms, and related to the Steins, a Scottish distilling family with interests in Dublin. In 1780 the Bow Street Distillery was producing about 30,000 gallons annually. By the turn of the 19th century, it was the second largest producer in Ireland and one of the largest in the world, producing 1,000,000 gallons annually. Dublin at the time was the centre of world whiskey production. It was the second most popular spirit in the world after rum and internationally Jameson had by 1805 become the world’s number one whiskey.

Originally one of the six main Dublin Whiskeys, Jameson is now distilled in Cork. The old Jameson Distillery now serves as a museum.