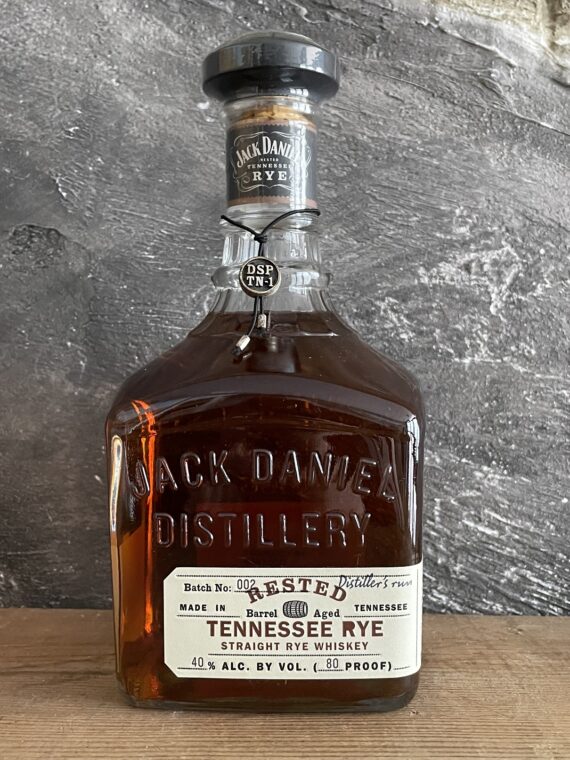 Jack Daniel’s Rested Tennessee Rye batch 002, bottled for Japan in 2014. Its mash bill at the time was the first new one in more than a century: 70% rye, 18% corn, and 12% malted barley. After fermentation, the wash is charcoal-filtered, allowing for the “Tennessee Whiskey” title. Following that, it rests in American Oak casks for just two years.

Jack Daniel’s Distillery was founded in 1866, according to other sources 1875, in Lynchburg, Tennessee. Jasper Newton Jack Daniel was born in 1850 in a family of 13. Jack Daniel received a license to produce Whiskey at the age of 16, being the first distiller which was registered in America. After Jack’s dead in 1911 the distillery became the property of Jack’s cousin Lem Motlow. Because of the prohibition in Tennessee, the company began distilling operations in St Louis, Missouri, and Birmingham, Alabama, though none of the production from these locations was ever sold due to quality problems. The Jack Daniel’s distillery ceased operations from 1942 to 1946, when the U.S. government banned the manufacture of whiskey due to World War II. The company was later incorporated as “Jack Daniel Distillery, Lem Motlow, Prop., Inc.” This has allowed the company to continue to include Lem Motlow, who died in 1947, in its marketing, since mentioning him in the advertising is technically just citing the full corporate name. The company was sold to the Brown-Forman Corporation in 1956.