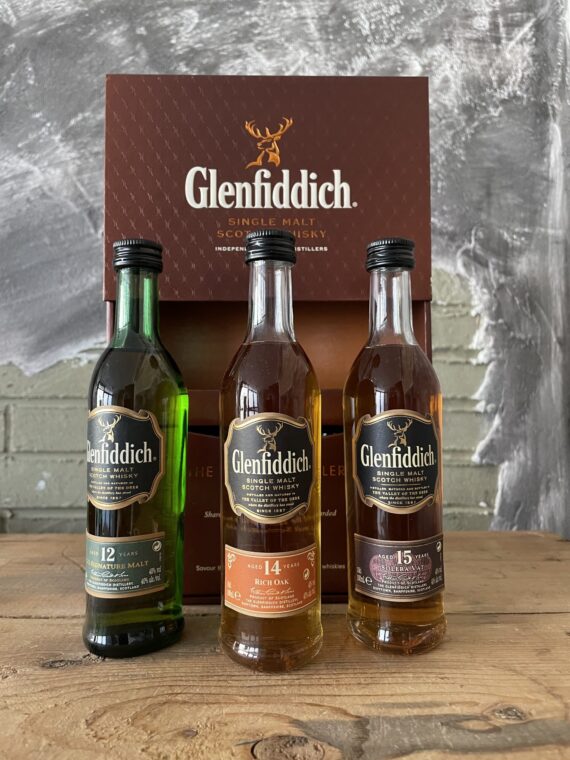 Glenfiddich’s The Family Collection does contain three expressions of the range and was bottled around 2010.

The Glenfiddich Distillery was founded in 1886 by William Grant in Dufftown, in the glen of the River Fiddich. The Glenfiddich single malt whisky first ran from the stills on Christmas Day, 1887.

In the 1920s, with prohibition in force in the USA, Glenfiddich was one of a very small number of distilleries to increase production. This put them in a strong position to meet the sudden rise in demand for fine aged whiskies that came with the repeal of prohibition.

In the 1950s, the Grant family built up an onsite infrastructure that included coppersmiths to maintain the copper stills, and a dedicated cooperage that is now one of the very few remaining in distilleries. In 1956 the Grant’s brand launched the now-iconic triangular bottle, designed by Hans Schleger.

Following difficult times in the 1960s and ’70s, many small, independent distillers were bought up or went out of business. In order to survive, W. Grant & Sons expanded their production and introduced advertising campaigns and a visitors’ centre. In this period they also decided to start marketing single malt as a premium brand in its own right, effectively creating the modern single malt whisky category.

Later, W. Grant & Sons was one of the first distilleries to package its bottles in tubes and gift tins, as well as recognising the importance of the duty-free market for spirits. This marketing strategy was successful, and Glenfiddich has now become the world’s best-selling single malt. It is sold in 180 countries, and accounts for about 35% of single malt sales.

Be the first to review “Glenfiddich The Family Selection” Cancel reply