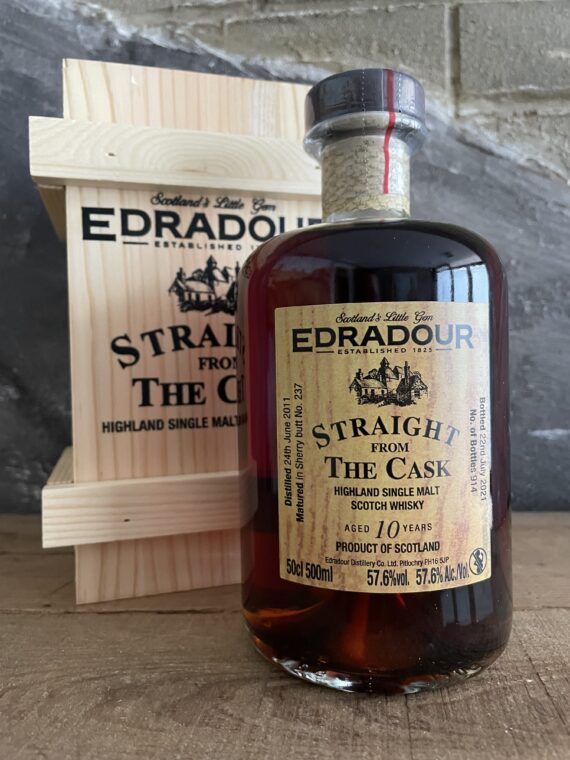 Edradour distillery (Scottish Gaelic: Eadar Dhà Dhobhar, “between two rivers”) is a Highland single malt whisky distillery based in Pitlochry, Perthshire. Its owners claim it to be the smallest distillery in Scotland. It has been owned by the Signatory Vintage Scotch Whisky Company since 2002, and was previously owned by Pernod Ricard. Signatory, founded in 1988, is primarily an independent bottler and is based in Pitlochry.

Established in 1825, the distillery was traditionally run by three men, but now there are just two. Only eighteen casks are produced each week. They have a tour which costs £10 and currently includes two drams and a nosing glass.

The wash still has a capacity of 4200 litres and the smaller spirit still 2200 litres.

A variety of whiskies are available from the distillery. Only the Edradour 10-year is chill-filtered, a process by which the esters and oils are removed, producing a cleaner look to the whisky, which when chilled or has ice added to it does not turn cloudy. There is, amongst others, a non-chill-filtered 12-year-old malt, some of which goes into the “House of Lords” and “Clan Campbell” blends.

Also produced for two days in a week is a heavily-peated version of the Edradour called Ballechin. It is named for the former distillery at nearby Ballechin.