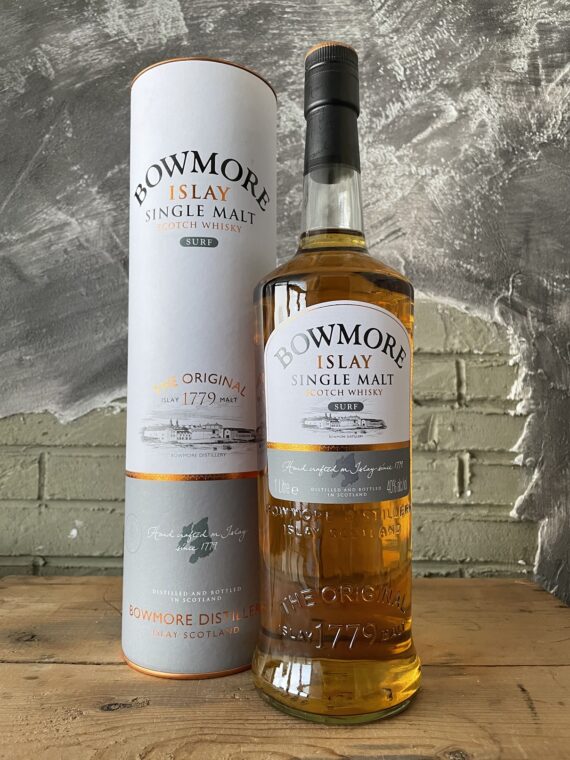 Bowmore Surf is a no-age statement duty-free retail exclusive release which meanwhile is discontinued. This is the 2007 release.

Bowmore is a distillery that produces scotch whisky on the isle of Islay, an island of the Inner Hebrides. The distillery, which lies on the South Eastern shore of Loch Indaal, is one of the oldest distilleries in Scotland, said to have been established in 1779 by a local merchant, John P. Simpson, before passing into the ownership of the Mutter family. James Mutter, head of the family, also had farming interests and was Vice Consul representing the Ottoman Empire, Portugal, and Brazil through their Glasgow consulates. There are no records that pinpoint the exact date Mutter acquired the distillery from Simpson. Mutter would introduce a number of innovative processes to the distillery during his tenure and even had a small iron steam ship built to import barley and coal from the mainland and to export the whisky to Glasgow.

The distillery was bought from the Mutter family in 1925 by J.B. Sheriff & Co. and remained under their ownership until being purchased by Inverness-based William Grigor & Son, Ltd. in 1950.

During the World Wars the Bowmore Distillery halted production, and hosted the RAF Coastal Command for much of World War II, Coastal Command operated flying boats from Loch Indaal on Anti-submarine warfare missions.

Be the first to review “Bowmore Surf (2007)” Cancel reply