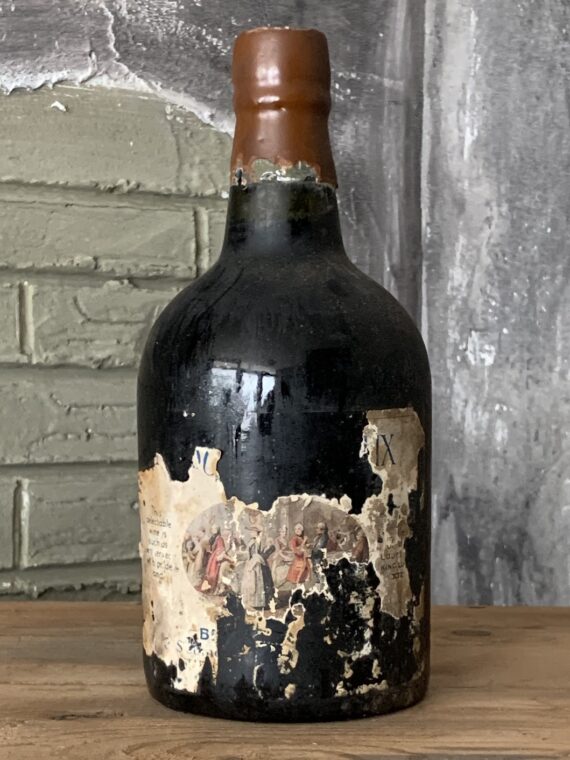 This ancient bottle contains ‘wine such as was served with pride at the Royal Court of Louis XIV’, selected, bottled for and released by Berry Bros & Rudd. Which wine exactly is unknown, the remainder of it’s label would suggest it is a Bordeaux. The bottle is originally sealed, level bn. It does appear a turn-mold ‘squad brandy’ bottle which was produced between 1900 and 1915. But whatever the wine inside: it was good enough to please Louis XIV, extremely rare and at least hundred years old. Should this not belong in a museum….?

Berry Bros. & Rudd is one of Britain’s oldest wine and spirit merchants: in 1698 it opened its doors for the first time at 3 St. James’s Street, London, and today it continues to trade from the same premises. The company has a discounted store in Basingstoke, Hampshire and offices in Japan, Hong Kong and Singapore.

Founded by the widow Bourne, the company has supplied the Royal Family since the reign of King George III. Berry Bros. & Rudd was his wine supplier then. First they sold coffee, and then cocoa, tea, snuff, spices, anything that was considered exotic and new, and became one of London’s premier grocers. Its proximity to St. James’s Palace and its fashionable location also helped popularity.

A first Royal Warrant of Appointment was granted in 1903 by King Edward VII. Queen Elizabeth II granted her royal warrant in 1995, Charles, Prince of Wales granted his in 1998. Customers have included Lord Byron, William Pitt the Younger and the Aga Khan.