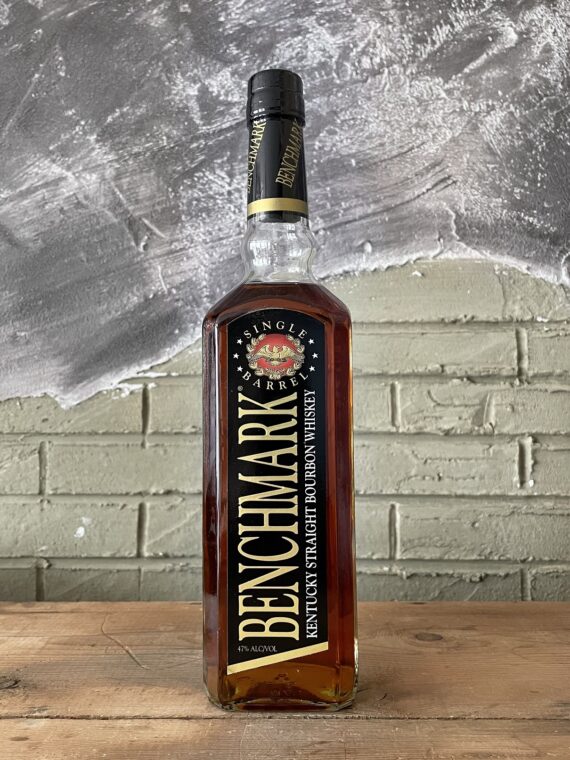 In most whiskey aging warehouses there is a “hony spot” or two, those special places where, for unknown reasons, the conditions for whiskey ageing are perfect. Whiskey aged there stands apart from the rest. Benchmark Single Barrel is just such a whiskey. This one was produced in 1978.  In 1989 the brand became part of the extensive Sazerac/Buffalo Trace/Heaven Hill portfolio and the name McAfee was added.

The Old Benchmark Distilling Company closed in the early 2000’s.

The Benchmark brand was created by Seagram’s in the late 1960s to be a luxury or premium-level bourbon. At that time, the whiskey was not called McAfee’s, but simply Benchmark Bourbon; and the name McAfee came much later.

The Benchmark brand name was purchased by the Sazerac Company in 1989 from Seagram’s. It is still owned by Sazerac Brands of New Orleans which also now owns the Buffalo Trace distillery in Frankfort, where Benchmark is now made. The origin of the McAfee name is that Hancock McAfee was, in 1775, one of the first European settlers at the site where Buffalo Trace stands today. The original Benchmark was made at Lawrenceburg, Kentucky at the Four Roses Distillery when Seagram owned it.